After 16 years of leadership, John Roach retired and was replaced by another active Pilot, Bob McDaniel. McDaniel began his airport career 33 years earlier as a Line Service Technician at St. Louis Downtown Airport and returned to the area after a 25-year Air Force career and three years as director of the Texarkana Regional Airport. 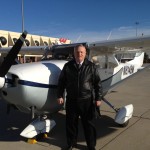 Taxiways “H” and “K” and the West Ramp were resurfaced, the main terminal ramp was removed and replaced, and the Localizer was relocated to line up with the runway centerline to reduce approach minimums by 50 feet. A siting study for a new 138-foot air traffic control tower was also completed. New tenants established operations at the airport including Air Evac Lifeteam who made the St. Louis Downtown Airport their regional maintenance and administrative headquarters. Several new private and corporate hangars were constructed. The airport became home to about 250 aircraft, handling nearly 200,000 operations annually, employing over 900 people, and contributing over $135 million annually to the local economy.