More than two dozen high school students from around the country and the bi-state area converged on St. Louis Downtown Airport in late June as part of a weeklong camp to learn more about careers in the aviation field. Juniors and seniors in high school participated in the Aviation Summer Academy event, hosted by Saint Louis University’s Oliver L. Park Department of Aviation. This was the first in-person Aviation Summer Academy since 2019.

The students spent time in the university’s flight simulators at St. Louis Downtown Airport and took short discovery flights over the downtown St. Louis area on June 28. Then the students went flying with experienced flight instructors from SLU on June 29 for longer, cross-country flights, during which they flew into a different airport and landed before returning to St. Louis Downtown Airport. While many of the students had experienced discovery flights before, for some, the flights represented the first time being a passenger in a small aircraft. And for all, the longer, cross-country flights integrated some of the aerial navigation planning that campers had learned earlier in the day, such as reading a sectional, mapping out the course, identifying waypoints, and calculating fuel and times.

Stevie Potter, a student at Kirkwood (MO) High School, was impressed with the depth of SLU’s aviation program and excited at the opportunity to fly.

“I think it’s very cool they have 15 airplanes and 3 different types of aircraft, so you can learn the multi-engine airplanes and instrumental airplanes too,” Potter said.

While getting to fly was a thrill, another highlight of the Aviation Summer Academy came when firefighter Terry Bowman took the students out on the runway in the Incident Support Bus. The short trip provided them the opportunity to see the runway and taxiways from a unique vantage point as Bowman talked about the role of his department and the maintenance team in maintaining a safe operating environment at all times. The students also walked around on the runway and experienced it outside of a cockpit, something that highlighted the unmatched proximity to the Gateway Arch, which is only a few minutes west of the airport.

View a slideshow from Aviation Summer Academy below. 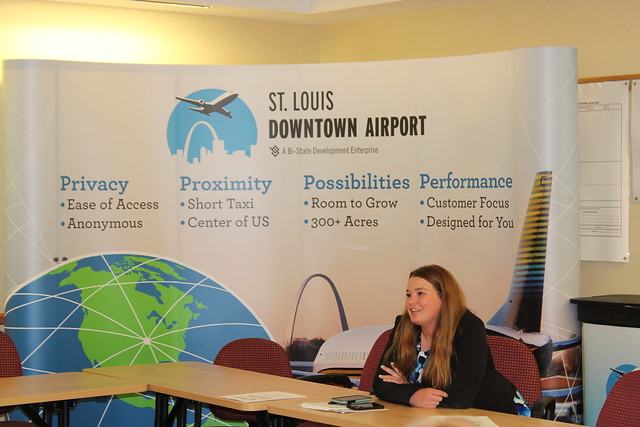 The camp also included a tour of other facilities at the airport, including the fire station, where the students got an up-close look at the airport’s firefighting equipment for aircraft. The students were impressed that the 2009 Rosenbauer Panther 6X6 ARFF Vehicle can hold 3,000 gallons of water, 400 gallons of foam, 500 pounds of dry chemical, and 460 pounds of Halotron. The vehicle is 39 feet long and weighs 80,000 pounds when fully loaded with all firefighting agents.

“I didn’t know St. Louis Downtown Airport was such a big deal, with a firehouse and everything,” Potter said. “I thought it was just a tiny airport.”

St. Louis Downtown Airport Director Sandra Shore shared additional information with the students about the airport that underscored its significance as a $422 million regional economic engine.

“In Illinois alone, the airport industry has a $95 billion impact,” said Shore. “I’m here with a staff of 10, but we support hundreds of thousands of flight operations every year. We operate the third busiest airport in Illinois behind Chicago, O’Hare and Midway. All these planes, businesses and tenants rely on us to operate the airport and that’s where our economic impact comes in.”

Amy Preis, outreach coordinator for Saint Louis University’s Oliver L. Parks Dept. of Aviation, explained that, while getting to fly is by far the biggest draw of the camp, the overall goal is to take the students beyond piloting careers and introduce other aviation careers they might not have known about or may not have considered if they were not introduced to them.

Shore helped to reinforce those opportunities in her conversation with the students. “What you find is that everybody usually gets into this industry to be a pilot and then realize there is so much more than that,” Shore said. “There is traffic control, airport management, aircraft servicing, mechanics and more. It’s just way bigger than you’ll ever imagine.”