Local health departments from 15 counties in Missouri and Illinois completed a two-week readiness exercise in October to test their ability to work seamlessly together to protect the public health in response to the simulated release of a biological agent in the St. Louis region. The exercise was part of the Centers for Disease Control and Prevention’s (CDC) Cities Readiness Initiative, which included testing the Long-Term Medical Countermeasure Dispensing Plan — one of the first times that such a plan has been tested in the U.S. After two years of planning for the 14-day exercise, it culminated on Thursday, Oct. 10, at St. Louis Downtown Airport, where local health departments, emergency responders, hospitals, and other organizations in the bi-state area worked with state and federal partners to successfully demonstrate their readiness to respond. 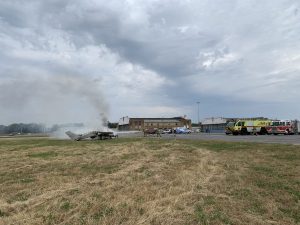 If the primary threat in an emergency situation is health related, local health departments would lead the response and manage the distribution of lifesaving medical countermeasures to the community. The final day of this exercise called for them to establish a POD (Point-of-Distribution) where the various organizations could simulate the distribution of antibiotics and vaccines to a large local population of people exposed to anthrax following the feigned release of the biological agent in the region. Anthrax was chosen as the agent for this particular exercise as the treatment protocol requires a 60-day regiment of antibiotics. The first 10 days of treatment are handled separately from the remaining 50 days. The exercise included dispensing for the remaining 50 days to test the Long-Term Medical Countermeasure Dispensing Plan. Under this scenario, individuals identified as having been in the targeted exposure area were asked to visit a POD to get the vaccination and pick up additional medication to be taken over the next 50 days. The goal of PODs is to create central distribution points to get needed countermeasures to the public quickly following the release of any biological or chemical material that threatened public health and required an extended treatment protocol. The response plans are designed to be scaled up or down depending on the type of incident.

“An exercise like this helps us prepare for something we hope never happens, but to make sure we’re doing this with the same fidelity and the same confidence that we do all the time; and we did that,” said Amy Yeager, Director of Community Health for Madison County Health Department, who served as the Regional Public Information Officer (PIO) Lead for the Illinois Department of Public Health Edwardsville Region during the exercise.

“We’ve come together as a region and that’s tremendous. This doesn’t happen very often across the country that you have two states that can come together with 15 counties to pull something like this off and be able to say we’re ready. We can do this.”

During the exercise, staff from participating organizations and other volunteers took on the role of “patients” who had to be processed through the POD. That gave staff with the health departments and participating hospitals the opportunity to test their timing, flow control and collaboration in dispensing the life-saving countermeasures.

To create a more realistic simulation, the volunteers included individuals with disabilities who required a little extra time to be processed. Some of the patients were given instructions to act in specific ways to interrupt the process, testing the response protocols of onsite police officers. Others were given paperwork indicating they had health conditions that may have impacted their ability to be treated, so the nurses had to respond accordingly. In all, 150 patients were processed within an hour, which Yeager and others leading the exercise noted was a significant achievement.

“We’re extremely happy with the way the planning process went for the event and with the actual exercise,” said Myla Oliver-Blandford, Assistant Administrator for East Side Health District. “It’s amazing to see so many agencies work together and have all hands-on deck, because we’ll need all hands-on deck in the event of a true emergency. It was really great to see everyone work as one unit and have it go so well.”

Barb Hohlt, Executive Director of St. Clair County Health Department, highlighted how vital it is for the region to collaborate in this way. “I can’t underestimate the importance of being able to join together several different groups for an exercise like this,” said Hohlt. “In a real event, no one agency can do it all themselves. You need all these bodies to force the system and test the system’s response. Even if we hope and pray we never have to use it.”

During the last part of the exercise, an old unusable aircraft was set ablaze to simulate a situation where a plane was deliberately flown over the site of the POD and purposefully crashed in an attempt to disrupt the distribution effort. Emergency responders from the St. Louis Airport Fire Department and Sauget Fire Department got to practice extinguishing the burning plane, and MedStar Ambulance also had vehicles at the site.

“While it was timed so it didn’t actually interrupt the health department exercise earlier in the morning, the plane burn added another element to it by calling attention to the fact that even a well-planned response could be further tested,” said Erick Dahl, St. Louis Downtown Airport Director. “Most importantly, it gave our emergency responders the opportunity to also evaluate their responsiveness.”

“We have such a great group of people here and such a great region,” said Beth Bussmann, Regional Coordinator for the Illinois Public Health Department. “New York hasn’t done it. LA hasn’t. The feds are looking at what we’re doing because we are trend setting. We are advanced. We are the best in the country.”