The directors of five busy airports in the St. Louis region say the collaboration that takes place among their airports is unique in the aviation industry and a model for success. St. Louis Lambert International Airport, Spirit of St. Louis Airport, MidAmerica St. Louis Airport, St. Louis Regional Airport and St. Louis Downtown Airport together account for more than 36,500 jobs (between airport operations and tenants) and generate a collective annual economic impact that exceeds $10 billion and is growing. 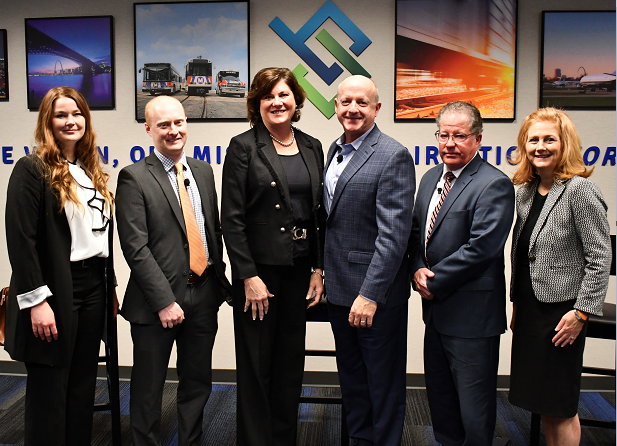 “This discussion helped raise awareness of the region’s robust aviation industry that is defined by these airports, their tenants and the aerospace products and parts manufacturing industry,” said moderator Mary Lamie, Executive Vice President of Multi Modal Enterprises for Bi-State Development and head of its St. Louis Regional Freightway Enterprise. “The region’s aviation industry has evolved through good and bad times and is highlighted by targeted efforts that focus on operations, infrastructure investment, industry leadership and expertise, and a proven track record for career development and job opportunities.”

To provide greater context for the career opportunities in the aviation industry, Lamie highlighted that:

The airport directors talked about the tremendous career opportunities in the industry and collaborative efforts to help build and support the aviation and aerospace jobs pipeline. Boeing is expanding at MidAmerica St. Louis Airport and will create at least 150 to 200 more jobs. West Star Aviation currently has approximately 40 positions available and additional expansion plans in the works at St. Louis Regional Airport could drive that number higher. Gulfstream is expanding its operations at St. Louis Downtown Airport and will be adding 140 new jobs. Events such as St. Louis University’s Summer Academy and Girls in Aviation Day at St. Louis Downtown Airport and the Spirit of St. Louis Air Show and Stem Expo continue to play a key role in attracting youth to the aviation industry.

St. Louis Lambert International Airport (STL) is the region’s busiest airport that today accounts for 7,000 jobs in the region. A new economic impact study underway is anticipated to reveal the airport’s impact has grown from the $4.2 billion reported in 2013 to more than $6 billion. Hamm-Niebruegge called attention to the fact that, aside from being the largest airport in Missouri, St. Louis Lambert International Airport ranks as the 32nd largest out of 450 commercial airports in the country. She added the airport is not just focused on passenger traffic, but on expanding all streams of revenue. She said the amount of cargo moved has doubled from 125 million pounds in 2016 to 251 million pounds in 2021, with much of that increase driven by the growth of Southwest and the belly cargo that Southwest can carry because it has so many flights per day from St. Louis Lambert International Airport. Hamm-Niebruegge also discussed the recent creation of a U.S. Department of Agriculture (USDA) port of embarkation at her airport that allows live animal charters. While Chicago also has such operations, word is getting around that St. Louis Lambert International Airport is far more efficient and easier for the handlers. Lufthansa’s new direct flights from St. Louis to Frankfurt, Germany were also highlighted. Launched in June 2022, the new service marked the first direct flights from St. Louis to Europe in 20 years.

She said the biggest project on the horizon for St. Louis Lambert International Airport is the proposed consolidation of the existing two terminals, plans for which she hopes can come to fruition in the next 12 to 14 months. If everything moves forward, construction could start in 2026 on a single consolidated terminal that would carry the region well into the future.

Hamm-Niebruegge offered a glimpse into the working relationships between the five airport directors, which she said is more collaborative than competitive because of the unique niche each has in the industry.  “When you put the greater group together and you think about the offerings we have, if you’re a customer in this region, you have a choice of going just about anywhere.”

Spirit of St. Louis Airport (SUS) in Chesterfield, Missouri has more than 3,000 employees on site between airport operations and tenants and a total annual economic impact that exceeds $400 million. Bales said the airport has nearly 400 based aircraft, 100 based jets, a full-time customs support center, three FBOs, a variety of customers and maintenance operators, as well as many corporate flight departments and charter operators. Prior to COVID, Bales said the airport was averaging almost one international flight a day, something most people likely would not know.

‘The charter operators did really, really well during COVID, and they continue to do well,” said Bales. “People that maybe had the means but had never tried it, tried it and liked it. It’s been good for us. Take off and landings and fuel sales are the highest they’ve been in 10 to 15 years. The future looks bright for Spirit.”

Spirit of St. Louis Airport is just starting its latest master plan. Bales said it will be their roadmap for the future and will guide several very important projects representing an investment in the range of $50 million in the coming years.

St. Louis Regional Airport (ALN) in East Alton, Illinois supports more than 1,500 jobs and has an annual economic impact of $480 million. Adams said his airport’s role as a general aviation facility brings in business across the aviation spectrum, from Fortune 500 companies to the private aircraft owner, with everything from single engine and twin-engine aircraft, all the way up to multimillion-dollar corporate aircraft coming for maintenance. That maintenance is provided by the airport’s largest tenant, West Star Aviation, which has nearly 600 employees at the airport. It offers any type of maintenance repair on aircraft, from painting to engine repairs and interior jobs. The airport also has about 120 T-hangars for individuals to store their planes.

“We can serve from your smallest little single engine plane up to the largest aircraft that can fly,” said Adams. “We’re not interested in bringing in the commercial airlines, but we are interested in catering to those private aircraft owners.”

More than $7 million in airport improvements are planned at St. Louis Regional Airport for 2023, and Adams said he also is focused on growing both aeronautical and non-aeronautical business at the airport. He noted he would like to attract a flight school, grow fuel sales and bring back an onsite restaurant as an additional amenity.

“Some of our efforts certainly are focused on furthering the low cost carrier model and helping to promote ultra-low cost carriers as well, complimenting what Rhonda and her team do so well over at STL,” said Johnson. “We expect to be at construction next year on a new U.S. customs federal inspection station, which will allow for further development of our low-cost carriers that are supporting international travel in and out of the metro area as well as domestically.”

St. Louis Downtown Airport (KCPS) is located in two Illinois municipalities – Cahokia Heights and Sauget, Illinois, and contributes more than $422 million in economic impact for the region and more than 1,500 full-time and part-time jobs. Shore said a variety of users and tenants contribute to those totals, from the single engine hobbyist to business and corporate aviation, three flight schools, several aircraft and helicopter maintenance organizations, plus one of the region’s largest maintenance and repair organizations Gulfstream Aerospace. Gulfstream is one of several tenants that will benefit from the latest infrastructure investment underway at the airport – the construction of a ground engine run up and compass calibration area. The project should be completed in 2023, and will support existing and future high-tech aerospace manufacturing jobs at the airport by improving production safety, reliability and efficiency.

“I think the most distinctive characteristic of St. Louis Downtown Airport is our close proximity to downtown St. Louis,” Shore said. “We’re located right across the Mississippi River. And as a general aviation airport without commercial service, we really see us as the front door to the region.”

Its invaluable location makes St. Louis Downtown Airport a popular choice for those flying into the region for major events in eastern Missouri and southwestern Illinois, including the NASCAR Cup race this past summer, which Shore said drew 40 charter flights, each with about 50 passengers, over the course of the weekend.

The panel discussion with the five airport directors highlighted the St. Louis region’s overall position as a vibrant commercial and general aviation hub in the heartland of the nation. Click here to watch the full video of the Take Flight Forum.